Memoirs of a Jewish Journalist in Nazi Germany

Memoirs of a Jewish Journalist in Nazi Germany by W.L. Schlesinger
My late father wrote this on the 50th anniversary of the Brown Shirts kicking all Jews out of Political and Judicial service in Germany. I truly believe it is a story that deserves to be read over and over again - not because it talks about the holocaust, but because, it doesn't. It's a story that gets repeated over and over again. Even now, we live in a time when, more and more, the powers that be have powers over us... 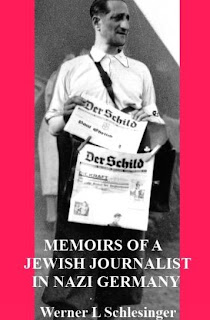 In Apri, 1933, Werner Ludwig Schlesinger was on his way to work at the German Appeal Court when a band of Brownshirts approached him and asked whether he was Jewish. Upon admission of his ethnicity, he ‘collected the hiding of his life’ and was forbidden further work at the German courts.

As he had both a law degree and a journalism degree, he was able to find work at a Jewish newspaper. His next three years were spent, amongst other things, covering Jewish events, witnessing the birth of rockets and television, and Einstein’s farewell speech at the Westend Synagogue in the Princzregentenstrase.

As one of only three Jews in Berlin with the requisite journalism degree, he was responsible for signing off on the copy of other Jewish Journalists in the city. Often this was dangerous work. If he did not read the copy too carefully, and something that offended the Nazis slipped through, his life would be forfeited.

In 1936, while on holiday in Switzerland, he received a telegram from his mother not to return. As he had been expecting a visit from the Gestapo, he made his way to South Africa. This is the story of those long three years.

Posted by MiladyTess at 8:45 AM